Interest in building a town at the intersection of present day US 178 was evidenced in the acquisition of substantial properties of the Reddick A. Bowman estate by one Samuel W. Dibble, Sr. of Orangeburg, SC in 1887. The Smoak Tramway, a six-mile logging railroad extending from Branchville toward north Four Holes Swamp which was chartered in 1884, was also targeted for acquisition by Mr. Dibble’s associate, Thomas M. Raysor, who operated the Raysor Mill near Stokes. These actions, aimed at developing and exploiting the agricultural and lumbering potential of an area that had remained rather dormant since the Civil War, were taking place in the late 1880s. These represented the prelude to the chartering of the future Town of Bowman and the transportation and land development organizations and operations which preceded its chartering. The site chosen for Bowman was actually situated in the center of a rice farming country, later transformed into a major cotton producing area where the land has a clay sub-soil, ideal for this and other crops. It was located on an old road that was traveled in colonial days by people going from Charleston to Orangeburg.

The Charter incorporating the Town of Bowman was applied for by Rhett Shuler, L. Fletcher Easterlin, and Richard J. Smith, who were authorized to hold an election and effect the incorporation of the Town of Bowman as described in the Charter. An area consisting of a one-quarter mile square was to be designated to the Town.

The first official records available bear the date of a council meeting held on December 13, 1903, which was signed by B.O. Evans, Intendant. The records indicate various and continuous meeting of the town officials from that time to date 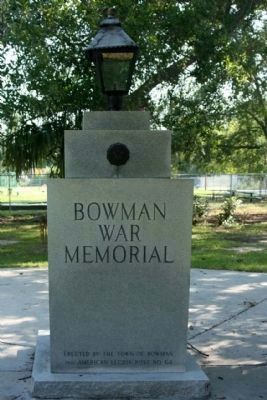 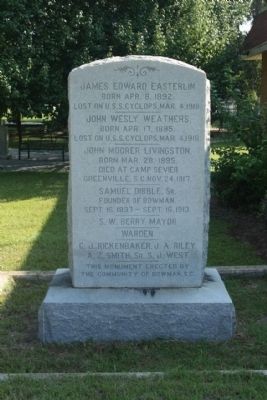 Bowman does not want for patriotism.  Its sons and daughters have rallied to every emergency confronting the nation. The history of Bowman would be incomplete without a tribute to those who have made the ultimate sacrifice in the cause of peace and freedom. Memorial monuments erected in the town square attest to this, by recording in granite the names of those that have perished as follows:

An eternal flame burns atop the monument dedicated to those that died while serving. A flagpole was erected adjacent to this monument during the Centennial Celebration as a tribute to the patriotism of the men and women of this area who have served in the defense of their country.

Still another hero must be honored; not a native son, but a courageous pilot from Alhambra, California. In December 1970, the town unveiled a special bronze plaque commemorating the heroic action of Captain Richard Arnold Morris (1935-1965), U.S. Air Force. On February 19, 1965, he deliberately guided his disables supersonic jet fighter to a fiery crash at the outskirts of the town in order to save the inhabitants of Bowman the horror of a terrible accident. A bronze memorial plaque was erected adjacent to the eternal flame monument in the town square as a tribute to this fallen warrior.